The IUPAT offers two scholarships to students pursuing an educational degree at an academic institution of their choice. The sons, daughters, and legal dependents of IUPAT members in good standing are eligible to apply for the following scholarships listed below. Please click on the links to access the application forms.

At the 25th General Convention held in Washington, D.C., in August 1984, a resolution was passed, creating the S. Frank “Bud” Raftery Scholarship Fund in honor of his service to the International Union, his accomplishments and his progressive thinking.

At the 27th General Convention held in Washington, D.C., in August 1994, then General President A. L. “Mike” Monroe and the General Executive Board, who strongly believed in the principles for which the scholarship was created, passed another resolution to increase the S. Frank “Bud” Raftery Scholarship Fund to $20,000.00, allowing for 10 scholarships of $2,000 annually.

All applicants must submit an essay, not less than 1,000 or more than 2,000 words, on an essay topic chosen by the IUPAT Scholarship Committee.

Click on the application link below to learn more about this scholarship and how to apply.

At the International Union of Painters and Allied Trades’ convention in 1999, the A.L. “Mike” Monroe/Ralph D. Williams, III Sports Scholarship was introduced and ratified into the union constitution. This groundbreaking program was created to offer student athletes the opportunity to pursue their athletic ambitions while earning an advanced educational degree at the academic institution of their choosing.

The namesakes of this new scholarship program were both accomplished boxers as teenagers. In fact, Williams was elected into the Pennsylvania State Boxing Hall of Fame as well as being an avid football player. Yet, despite their athletic talent, neither man had the resources to attend college and instead joined the trades at a young age. This scholarship, named in their honor, will give IUPAT members’ sons and daughters the chance for the education they never attained.

All applicants must meet the requirements stated on the application to be considered.

The award is contingent upon the student enrolling in the school of their choice within one year of the award date or the   award is forfeited.

Click on the application link below to learn more about this scholarship and how to apply. 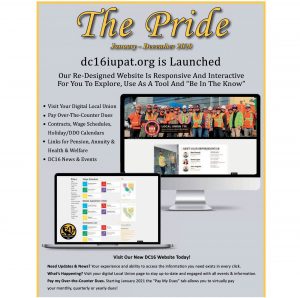 Brothers and sisters, Starting January 2021 you will now be able to pay your dues on DC16 redesigned website by going to www.dc16iupat.org on the “Pay My Dues” tab. You must register an account on the IUPAT MMP App to have access to the Pay Your Dues tab on DC 16’s website. You need to […]